Try our service with

Get 15% OFF Your first order

The first vital characteristic of postmodern architecture is radical eclecticism. Postmodernism is aimed at addressing the lack of ornamental emphasis in the modern era. Woods (1999) affirms that it entails the use of diverse styles, traditions, and codes to ensure the achievement of the best designs for buildings. The combination of different aspects makes it possible for postmodern architecture to appeal to the contemporary world and ensure that everything is as current as possible. Ornamental finishes are vital for ensuring that users enjoy every bit of the buildings. More so, eclecticism eliminates the distinction between the high culture and the low culture. Such approach ensures that the aesthetic aspects are maintained and respected. The overall result of neo-eclecticism is the attainment of high aesthetic effects and their reflection in different cultures.

Another significant characteristic of postmodern architecture is the celebration of spectacle. It entails the celebration of the aesthetic features of the architecture for their own sake, as opposed to subordinating the form of the architecture to its function. Duvall (2002) reiterates that postmodern architecture goes beyond focusing on the function of the building and places more value on its fictional and exciting form. Thus, it becomes clear why most postmodern buildings are aesthetically complex and interesting. In tandem with the characteristic of celebrating the spectacle, most postmodern buildings are constructed from complex finishes and tend to compete among themselves for attractiveness. The result is the continued modification of skyscrapers across different countries since the 1970s, when the postmodern movement has taken over the world of architecture. It also means that the users of the buildings have the opportunity to enjoy the beautiful nature apart from achieving their daily functions.

The third characteristic of postmodern architecture is the continued combination of designs and construction aspects from different historical periods. Postmodernism does not completely eliminate past architectural designs, but it tends to combine them with the aim of improving the quality. The main goal is to address the shortcomings of the previous architectural designs. Jencks (2010) agrees that it puts together a collage of historical styles, hence enhancing the aesthetic nature of buildings. The common historical styles it utilizes include the antiquity and the Renaissance periods. Accordingly, postmodernism mostly capitalizes on the shortcomings of modern architecture in different aspects such as design and decoration, which leads to the attainment of more appealing designs. The collection of unique aesthetic designs from different architectural periods ensures that they are always outstanding in any part of the globe. Woods (1999) opines that historical randomness is crucial for ensuring flexibility of the design of different buildings in the postmodern era, because there is no emphasis on one particular form.

Postmodern architecture is also characterized by the irrational space. Notably, postmodern architecture goes beyond the modern architecture’s focus on the rationalization and standardization of space. As a result, buildings are not necessarily arranged in a predictable geometrical shape. In most instances, postmodernism focuses on surprising and unique designs whose shapes cannot be easily predicted. According to Veith (2012), the final appearance of most postmodern buildings cannot be figured out easily because of the lack of fixed attitudes in their design. Technological aspects ensure that the best results are attained out of the respective designs adopted in the course of the construction of the buildings. The inclusion of technology makes most postmodern buildings multipurpose and efficient in the delivery of the desired services to individuals.

Examples of Postmodern Works and Considerations They Generate

One of the key examples of postmodern architectural works is the Sony Building (formerly AT&T building) in Manhattan, New York.

Caption: The Sony Building in Manhattan was completed in 1984 and was initially referred to as the AT&T Building. It was designed by Philip Johnson and John Burgee. The photo was taken by Alan Schein/Corbis.

The Sony Building is one of the popular examples of postmodern architecture because of its unique design and multipurpose use. According to Hernandez (2012), it generates considerations related to double coding, where buildings exhibit numerous meanings simultaneously. It generates the double coding consideration as a tall skyscraper with connotations of the current technology. More so, its top parts entail the key elements of classical antiquity, hence clearly helping it convey the considerations of double coding. As aforementioned, most postmodern designers looked forward to coming up with the structures that would have a multipurpose appeal. Such approach eliminates cases where the building is only limited to the performance of a particular set of functions with the help of its design.

The second significant example of a postmodern piece of work is the Moor House in London, England. The image is provided below. 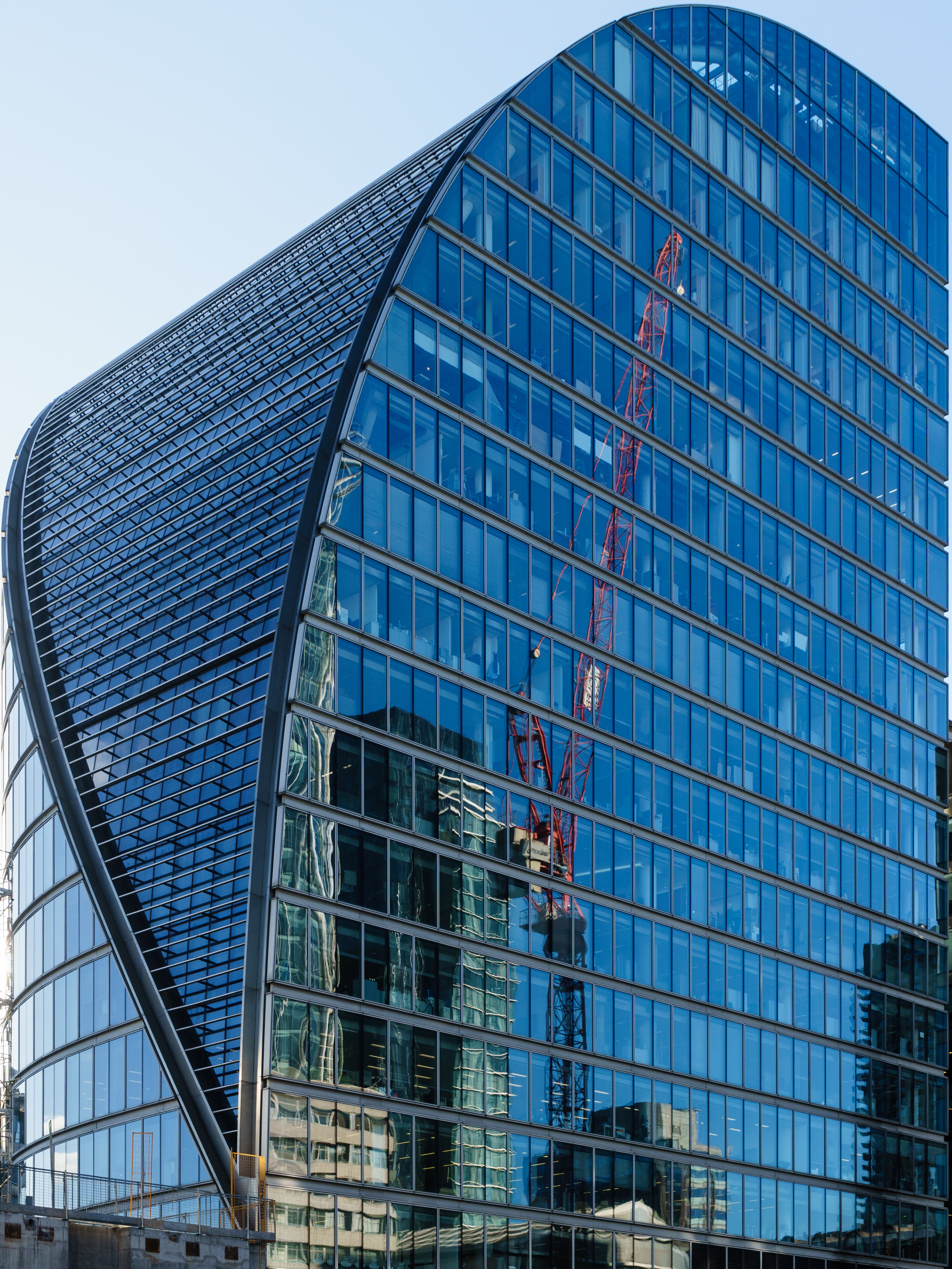 Caption: The Moor House in London, England, was completed in 2004 as a postmodern piece of work. It stands at the northern edge of the financial district and is one of the largest buildings in the area. The architect in charge of the design of the building was Foster and Partners.

The third vital example is Tenerife Concert Hall in Canary Island, Spain. The image is as follows.

Caption: The Tenerife Concert Hall is also referred to as the Auditorio de Tenerife. It is another vital example of postmodernism. It was designed by Santiago Calatrava Valls and was completed in 2003.Therefore, it is one of the most recent architectural works.

It primarily generates considerations related to the communication of meaning. It communicates expressionist meanings that make it an outstanding concert hall in Spain. Duvall (2002) affirms that the communication of meaning is vital because it underscores the significance of postmodernism as an era focused both on the meaning and the significance of the works. It conveys the meaning of a giant auditorium capable of accommodating many people at once. This definition eliminates any limitation of its use for concerts and overall aspects of entertainment.

In conclusion, postmodernism marked a shift from conservatism in terms of building designs. There was a great need to embrace the changing technologies and desires of individuals in relation to the quality buildings that would meet their desires. Therefore, postmodernism is always associated with the combination of aspects from different cultures that ensure the best designs. More so, it goes beyond the functions of the works to emphasize their uniqueness and appeal to various individuals. It is vital to work in a place where people feel comfortable. Additionally, postmodernism ignores the need to focus on limited spaces and fixed designs. Uniqueness and quality are the main elements that need to be included in the construction aspects of every work. This approach has ensured that postmodernism remains outstanding in the contemporary world. Different works such as the Sony Building give a clear example of postmodernism and the generation of considerations relating to meaning, aesthetics, and double coding. The emerging technological trends have continued to define postmodern architecture, which means that such designs will have a long-term impact as the new discoveries emerge.

Get a price quote